So now we dump people on third world countries

Papua New Guinea. What is the definition of a third world country? A friend of mine, who has a different view to my view on the question of asylum seekers, pronounced today that third world, as a definition, is a cold war construct. Had anyone else said this, I would have simply suggested they get their arse on a plane and visit a third world country. This particular friend has travelled to less developed parts of the world, so I can only assume his political affiliation is blinding him to the realities.

Our “new and improved” Prime Minister, Kevin Rudd, has today announced a policy aimed at breaking the business model of the people smugglers.  Apart from my long-standing objection to calling people smuggling operations a “business model”, the plan is, quite frankly, fucked with a capital F.

Papua New Guinea (PNG) is a country where 70% of the women will be assaulted or raped in their lifetime. Please click on that link at look at the photo. Child prostitution is on the RISE. Witch-doctors and witchcraft are still prevalent. Amnesty has reported this year on violence against women.

The United Nations Human Development Indicator 2013 lists PNG at 156. That, to me, qualifies as third world.  Nigeria ranks 153 – higher than PNG. Yet I got told today Australia’s ADF is “stretched to breaking point”. Australia is ranked 2 in the UN HDI. Oh yes, we are at breaking point.

Our own Australian Smart Traveller site, as at tonight, recommends “Exercise a high degree of caution“. This may change by the time this article is published, so a screen shot is shown below. We already know the PNG health and education systems are less than we would consider appropriate.

Ethnic disputes continue to flare up around the country. Disputes can quickly escalate into violent clashes. Such clashes not only create danger within the immediate area but also promote a general atmosphere of lawlessness, with an associated increase in opportunistic crime. 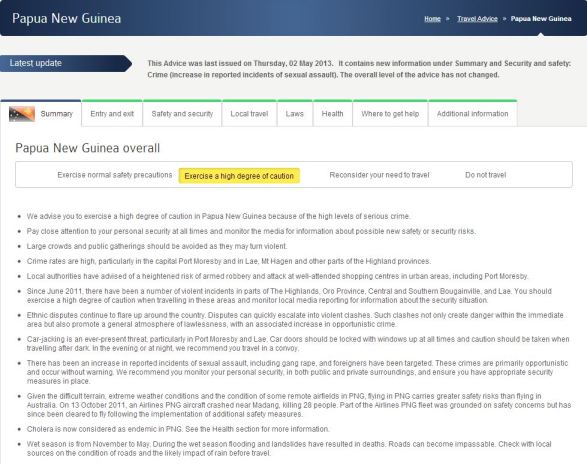 Clearly we have a developing country which is struggling to manage the citizens, let alone take on vulnerable displaced refugees who must start life from scratch.

My first reaction to the announcement today was one of disbelief. Sending people to a country with inadequate systems and infrastructure so we, in our oh-so-privileged, supposedly christian, first world haven, are not (heaven forbid) inconvenienced by the great unwashed from other lands is stupidity. Quite simply, stupidity. I will grant it is stupidity of the highest order, so if we wish to excel at stupidity we are making an excellent effort.

There is a concept called the future. Life is not all about the present, not all about “right now”. Sending people to be “resettled” (read abandon) in a third world country has the very high probability of creating a long term problem. We will simply end up with more or recycled refugees.

Mr Rudd said there would be no cap on the number of people who can be transferred to PNG.

In exchange for PNG receiving asylum seekers, the Australian government made a number of commitments, including to help with the redevelopment of the major referral hospital in Lei and its long-term management needs.

Of course PNG want our financial input. What developing country wouldn’t? I could use a word common in other lands that starts with “B”, but I won’t.  Australia wouldn’t stoop that low – would it?

Julian Burnside published an excellent article yesterday. I wonder what he thinks of today’s developments: I haven’t had time to catch up with his thoughts, he may be deep in legal research at the moment.

In the midst of this seeming solution, neither the government nor the opposition has considered the legitimacy or humanity of their approach. Neither has given the public an accurate and honest explanation, meaning they’ve instead been grievously misled by false statements and gross sensationalism by opposition immigration spokesman Scott Morrison, and most recently by Foreign Minister Senator Bob Carr.

There is nothing that annoys me more than short-sighted stupidity, especially when it is from the supposed leaders of our nation. We are about to dump vulnerable, often traumatised, displaced people on a country not yet developed enough to provide adequately for the citizens, let alone an influx of refugees.

I have faith in my fellow Australians. So many will not accept this as a solution. Not from Rudd, not from Abbott, Carr, Morrison or any of the other “Christians”.  The Greens may see more of a resurgence than they expected.

STOP THE BOATS by me

I am pleading with the author for a link – but a combination of his ideas and mine would be workable. It was an article about rather than pay people smugglers, Australia just charge directly. The author had some sensible ideas, but I didn’t save the link!

I may well edit this article over the next 48 hours as more information comes to light. To the person who commented my articles “are often provocative”: I bloody well hope so!

Edit: July 20, 2013 Since I wrote this article yesterday, it has come to my attention that while PNG is a signatory to the UN Refugee Convention, PNG opted out of many of the provisions.

Refugee advocate and lawyer David Manne said Australia had repudiated its obligation to protect refugees and would leave asylum seekers in ”inhumane and degrading conditions”.

While PNG was a signatory to the refugee convention, it had opted out of commitments to provide refugees with freedom of movement, education, housing or employment.

So, where does that leave asylum seekers actually accepted as refugees? No employment, no housing of education and no freedom of movement, whatever that means. The may not now be at risk of being bombed or shot in their homeland, now they will possibly starve. How are they to be fed? Clothed? Educated? It seems Christmas Island refugees will be exempt from the exemptions.

The expansion of asylum seeker processing in the country comes despite the significant caveats PNG has put on the refugees convention, but now insists these will not apply to people sent from Christmas Island.

Even so these reservations have drawn UN criticism, along with a section of the PNG migration act that allows the Foreign Minister “to determine a non-citizen to be a refugee” without any details on how such determination is made.

The UN concluded in its most recent periodic review, ”Currently, national legislation does not provide an adequate framework to deal with asylum-seekers and refugees in PNG.”

The above article also quotes some figures:

The murder rate in PNG is 13-times that in Australia – and closer to strife-torn Sierra Leone, according to most recent World Health Organisation figures – and the government’s response has been retrograde threats to impose the death penalty.

So while I do understand PNG is a beautiful country, there is no escaping the fact it is still a developing country. As Christine Milne (leader of the Greens) has stated, it was ”absolutely immoral” for us to ”dump thousands of vulnerable people into an impoverished country”. She is right.

University of Sydney professor of international law Ben Saul said it was hard to see how PNG could provide refugees with decent housing, education, healthcare and employment given the difficulties the locals had in securing such rights.

”PNG is one of the poorest countries in the world. It can’t provide basic rights for its own people, so do we really think PNG is going to prioritise making these rights for refugees over their own citizens?”

← Did you know tampons are more dangerous than guns now?
Malcolm Fraser has called for a Royal Commission →