Posted by Robyn Dunphy on February 19, 2014 in General

Continued from What goes around comes around. 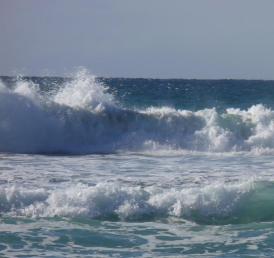 A crewman looked at him in disgust. He would see that look in many eyes and he shrank before it. The crewman knew him from the media reports of years ago. The crewman had waited on Nauru for years as a child. Now he was helping his persecutor escape.

“Get below, out of sight. There are those here who might want to harm you.”

He, this once powerful man who had vehemently protected Australia’s borders, was now at the mercy of those he had punished. He nodded and slunk down the steps.

Below deck the air was hot, fetid: there were frightened children huddled together. A pregnant woman cried softly in the far corner. He squeezed in an inch under the steps and the motor roared into life. He prayed they would get away. He prayed like he had never prayed before.

A woman stared at him, trying to remember why his face was familiar. He turned away, her gaze was penetrating his soul. He was hungry and thirsty, but his saviours had provided him with two milk containers of water and told him it must last the journey. Eight days. He desperately wanted to pee, but there was nowhere. He held on.

The woman who had been staring at him spoke.

“I know you. You were all over the papers. Bowen? Morrison? Which one?”

“No, I am a carpenter, my name is Jones”, he spluttered. Her look was the same as the crewman on deck. Jones shuddered. Jones, he thought to himself, couldn’t I have come up with something better? The woman shrugged and turned away: she was unconvinced but had bigger concerns than another passenger. So Jones he became.

Why couldn’t they be crossing the Tasman Sea rather than the Indian Ocean, Jones wondered. He’d been on the run for weeks and had no idea New Zealand had fallen two days after he fled Canberra.

Jones tried to sleep but he couldn’t. He took out the only photos he had of his family and stared at them. Were they safe? Had Africa been invaded too? Why were they going there? Was anywhere safe? He carefully put the photo away and closed his eyes.

His brain started playing games with him.

Reassured, the Jingle Bells in his head ceased and he finally slept, his chin resting on his knees.

Jones was woken by a boot meeting his shins. His bladder was bursting and his mouth was dry. It was the same crewman. “Don’t piss down here, it smells bad enough already. Go over the side”, motioning deck-wards with his head. The crewman roused other men and Jones saw the children coming back down. Obviously the women and children went first.

In major discomfort Jones crept up the stairs and found a spot against the rail to relieve himself. As he turned back, he was handed an apple and two slices of bread. Breakfast was plush. At least there was some food. He hadn’t thought of food; now he realised how hungry he was. He wondered if they had toilet paper on board.

Jones couldn’t see land. There were no other ships in sight. Nothing but ocean.

Continued at He felt the tip of a blade

← Was I too tough on Scott Morrison?
A little Australian history →

10 comments on “Nothing but ocean”