Posted by Robyn Dunphy on September 20, 2014 in Family, General, Our New Life

Let’s get one thing perfectly clear. Terrorists are terrorists. Regular readers know as an atheist I don’t have a lot of tolerance for religions. I acknowledge there are a lot of very good religious people but I believe those people are good people with or without religion: they would be great humanists. Religion didn’t make them good people.

Since the terror alert was raised by Mr Abbott some Australians seem to think that is a licence to attack innocent people. This has to stop. Here are just two examples of what is happening now.

On Twitter My grandpa who is a harmless 79 year old Indonesian born man got his house egged today because he's Muslim, I'm so ANGRY! 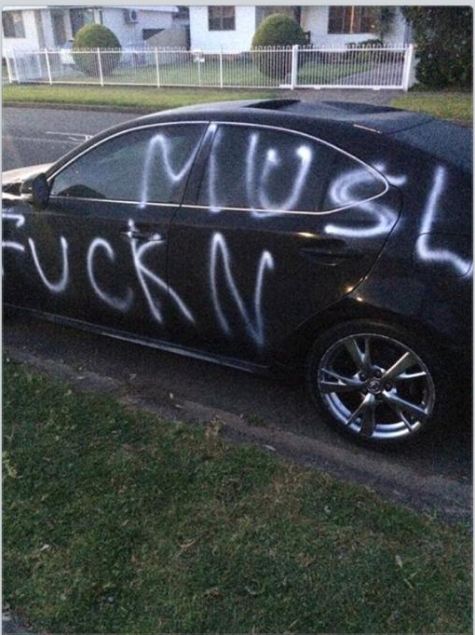 I have my own personal opinions about Islam and the objectives of The Prophet. I’m not going into detail as I am far from a scholar on the subject but in summary I see the development of Islam was, AT THE TIME, an attempt to advance human society in the region of origin and enhance the status of women. For the time, remember, in historical context. In SOME areas of the world, tradition has been merged with Islam and The Prophet’s objectives effectively lost. Maajid Nawaz wrote a very good article in January this year: Why I’m speaking up for Islam against the loudmouths who have hijacked it. To me, Islam does currently seem to be stuck in a bit of a time warp, but other religions have been in the past too.

There are certainly some leaders of the Islamic faith who have said some really, really stupid and inciteful things and who should, in my view, have been deported. On the other hand, there are Christian leaders who have made equally appalling statements, here and overseas. It seems when it is a Christian nutter, we shrug and think he is a nutter as an individual. When there is a nutter linked to Islam, we suddenly blame the entire Islamic population. The Saudi Arabian ban on women driving is nonsense.  Yet in Australia we have a Royal Commission into the abuse of children by various bodies, not one of them Islamic as far as I know. None of this makes your co-worker, your neighbour or your family  members either terrorists or child abusers. Terrorists are the sort of people that would be terrorists irrespective of the existance or otherwise of religion. If they weren’t co-opting the name of Islam, it would be something else.

I have been puzzled for some time over the attitude of Israel and the constant abuse of the Palestinians. Given what the Jews experienced during the Holocaust I cannot fathom how they can be so harsh to another ethnic group. It is beyond my comprehension. I mention this to remind readers there have been and are conflicts in the world which seem to have no rhyme or reason. Humans are a complicated species. More than any other living creature on this small planet, humans seem to delight in fighting and the destruction of their own. Not all of course, but enough of our number to make life miserable for many others.

ISIS and Boko Haram are two current examples of out of control humans.

Signatories including Mohammed Abbasi, from the Association of British Muslims, and Amjad Malik QC, president of the Association of Muslim Lawyers, write: “We do not believe the terror group responsible should be given the credence and standing they seek by styling themselves Islamic State. It is neither Islamic, nor is it a state.

“The group has no standing with faithful Muslims, nor among the international community of nations. It clearly will never accept the obligations that any legitimate state has, including the responsibility to protect citizens and uphold human rights.

I would call the abusers of children in the christian faiths heretics too.

Many people worry about the scarf or hajib worn by some Muslim women. If you look back through history, it is clear religions have a “thing” about women’s hair. Remember the nun’s habits of the Catholic Church? I don’t see a lot of difference, personally. I wouldn’t wear one, but then I don’t believe in any gods. IF any god did create us, might be worth remembering that god actually gave humans hair, so what is the whole hiding hair thing about? More about men controlling women than religion, I think.

Why are people targetting women wearing a head covering? Is this even remotely reasonable?

I live in a house with five Muslims. I work closely with two Muslims……and a variety of other religions. Yes, there are some aspects of Islam I find nonsensical but there are just as many aspects of other religions I find nonsensical. The belief unbaptised children will spend eternity in limbo is very strange to me. Having to be “cleansed” after childbirth before being allowed back into a church is another oddity. I find many of the punishments of Sharia law totally unacceptable. I recognise social evolution takes time and requires education and in many parts of the world education is sadly lacking.

We know terrorists can strike. We saw the Twin Towers crumble, we remember the Bali nightclubs. Australia is not exempt. Yes, we need to alert, but we must not live in fear and start retaliating for something that hasn’t even happened. There is nothing to be gained from attacking innocent people merely because they look different or have a different faith. I also remember the Weapons of Mass Destruction which never actually existed, but served a political purpose at the time of their “invention”. We have a Prime Minister flagging in the polls – fear is a wonderful weapon and right now I fear that weapon is being wielded without due care or consideration of the possible outcome. Yes, we may well have death on the streets: bigots attacking innocent people because they wear a scarf. Driven by fear and ignorance.

As Daniel Baldino writes on The Conversation, First rule of fighting terrorists: don’t do their job for them.

Do we stay home? Do we avoid public transport or airports or crowded movie theatres or the AFL final series? Do we shun strangers with beards? Do we re-read (or re-find) our Howard government-issued fridge magnets for instructions while setting our mobile phones to automatically dial the terrorist hotline when our spider-sense tingles (sorry, I can never remember the number)?

This type of “alert and alarmed” scenario tends to lead in a couple of directions: it either creates wider public paranoia or greater public scepticism. Neither is particularly helpful for an effective, sustainable and clear-eyed counter-terrorism strategy.

There are often accusations that Islam is not a religion of peace and writings are taken out of historical context as “proof“. Rarely does the same thing happen with verses of violence in the Bible.

Most often people inherit their religion (or lack of religion) from their parents and community. Someone born into a Roman Catholic family and community is brought up as a Catholic, they are not usually given the option to believe anything else. Someone born in Saudi Arabia is raised a Muslim. These accidents of birth don’t make people terrorists by virtue of their faith.

I have no problem with the terrorists being appropriately dealt with. We have very skilled police and security forces and believe they will take the precautions and actions required.

I am concerned that we, as a society, ensure we don’t convict innocent people in our minds and we protect them as valuable members of our community.

When members of our own government set bad examples, such as shown below, I worry.

This isn't just some troll. This is a member of the govt. I'm disgusted that he's equating ISIL with all Muslims. pic.twitter.com/pGlEiF7wX3

After all, how strange would the following sound:

Christian serial rapist, Wayne Kerr was taken in to custody today. Police acting on DNA evidence were able to identify Kerr as the man behind a number of attacks. The Premier praised the work of police in catching him and wanted to stress the vast majority of Christians weren’t rapists and found his actions abhorrent.

Footnote: This article was NOT written in consultation with anyone. Opinions expressed here are my own.

← Where will our kids work?
Office 2013 is Colourless or Colorless →

17 comments on “Terrorists are terrorists”