I read Mr Hockey wants us to work until we are 70.

If the Abbott government decides to further raise the pension age, it would be staggered over half a decade or more. 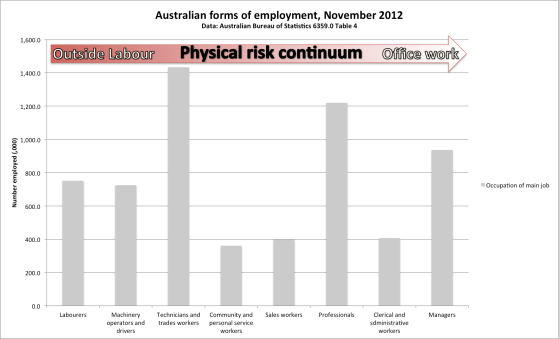 I probably can work until I am 70, provided I stay on hormone replacement therapy to keep my brain functional. I have a desk based job not requiring too much physical exertion. Also I am probably excluded as the change will be staggered to take into account those who worked pre the Superannuation Guarantee Charge days.

What of my husband, however? He has a very physical job. Are we expecting him to be shoveling mulch at 70? What of brickies, sparkies or chippies? They can’t all move into management, after all.

Won’t we be keeping young people out of a job? So pensions go down but New Start goes up? We can’t afford pensions but we can afford the Paid Parental Leave scheme?

We need a younger population as we are, as a colleague said today, an inverse pyramid. We need migrants to work to pay taxes to fund our older population.

What about that Liberal objective expressed in paragraph j:

(j) in which social provision is made for the aged, the invalid, the widowed, the sick, the unemployed and their children

I guess not, huh?

There is the little fact that the average life expectancy of a First Australian man is actually less than 70 years.

I totally accept that we cannot pay what we cannot afford, however I’m not sure making us work until we are 70 is such a sensible idea. There would probably be an increase in work related injuries in many occupations. Higher medical costs. On the other hand, Hockey also thinks we may have to disallow medicine for sick children.

We need to find other approaches to this problem, IF it is actually a problem and that is yet to be proven to my satisfaction. We give massive tax breaks to various businesses: perhaps some of THOSE need to be adjusted before we send 70 year-olds into the coal mines. Because of course under the current regime we don’t recognise environmental issues and we will indeed still be mining coal.

Some transparency about all this would be wonderful, but I’m not holding my breath. Sadly.

Credit: The Physical Risk Continuum graph was kindly compiled and supplied by Paul Davis, using data from the ABS. You can follow Paul on Twitter @davispg.

Edit: This was definitely a very quick, off-the-cuff rant. There are many considerations not discussed: childcare provided by grandparents, volunteer work undertaken by older people, the many professions requiring physical fitness, age conditions such as dementia, lack of sufficient superannuation for many in transition, superannuation dependent on economy (remember GFC?). Some of these aspects are discussed in the comments, so DO read the great comments below.

← The rain seemed relentless
I do not accept corruption – do you? →