We have a people problem

We have a problem. A people problem to be precise.

As I have been discussing of late, it is clear the human locusts are overgrazing the planet. We need to slow our breeding.

This is all very well and good, of course, but in order to do that we will shift the age distribution of the population. We live longer.

Based on United Nations projections, global population growth isn’t slowing as fast as we need. 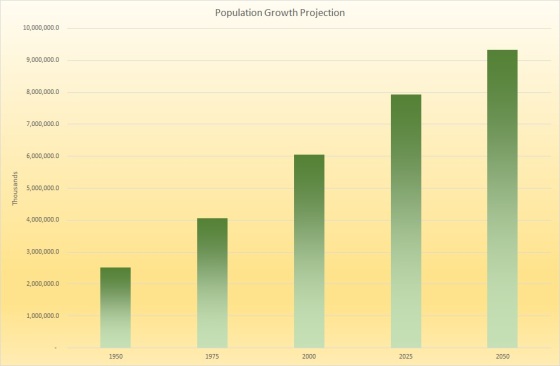 I have sourced these figures from a report prepared for the 2002 World Assembly on Ageing. There is considerable regional and age data available in that report – I have concentrated on a summary view.

As considered recently, it is the developing countries where the population growth is most noticeable. 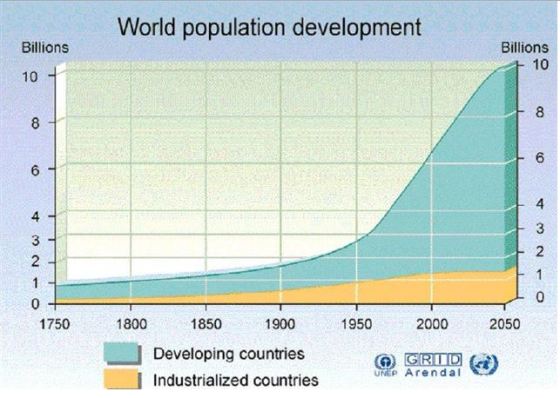 The source of the above chart does state “Population growth rates have been dropping in all regions of the world since the 1970’s, and this trend is predicted to continue.  Current expectations are that the human population will level off at about 8.9 billion people by 2050, and stabilize or slowly decline thereafter.” However, it also states projections are “Notoriously inaccurate”. Are the rates dropping fast enough? I’m radically suggesting not just a decline in the growth rate, but an ultimate (i.e. sometime beyond 2050) decline in the total population. Many researchers report the rapid increase in population is placing an ever-increasing strain on the environment.

The environmental challenges we face must be considered with the population explosion. These are not separate, discrete problems we can consider in isolation of each other.

We must control our footprint on this planet, however to do so means we will go through quite a number of years with a greater proportion of the population aged seventy or over than we have ever experienced. This poses social problems. If we reduce the number of children born, there will be fewer to care for the aged, whether than be privately within families or via social welfare funded by taxes. The developing countries are the least equipped to provide a social welfare system.

To see what we could achieve if we tried, I took the figures and played with them a little.

If we reduced our global birth rate initially by a third, then by half, we could reduce the projected population. These are completely arbitrary reductions. I have no suggestions as to how we achieve this. The Pope has at least said humans don’t need to breed like rabbits, so that is a start. China has had policies in place for years to try to tackle their contribution to population growth. 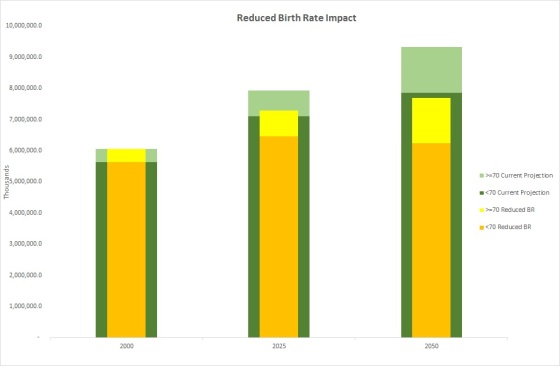 I split the population at seventy, simply because that is the age Australia’s current government is planning to set as the retirement age. The young also have to be cared for, however I have excluded the young from the above analysis as most of the dialogue focusses on the “ageing population”.

Such a reduction in the birth rate would assist the environmental impacts positively, but may have negative social welfare impacts unless we plan ahead and perhaps even make some major changes to how we distribute wealth.

… this year that the comparison was now even more stark, with just 80 people owning the same amount of wealth as more than 3.5 billion people, down from 388 in 2010.

In other words, eighty people hold as much wealth as half the world’s current population of seven billion. Visually, it is difficult to represent such an imbalance. It is difficult to comprehend such an imbalance logically or see enough compassion. This is not about catering to the lowest common denominator, as was suggested to me by a “I’m alright, Jack, the rest can starve” type the other day. This is about preserving the human species without annihilating millions in the process.

Global inequality is so bad it's almost impossible to visualise it http://t.co/lQF8c2ZhxJ pic.twitter.com/wjE51iCb06

The poorest are where the highest birth rates are, but also the shortest expected life spans. We can see quite clearly the shifting age distribution in the UN projections, from 1950 to 2050. Interestingly, the proportion of the population outside what could be considered the working age range remains at 42%.

If we reduce the birth rate and life expectancy continues to increase, the above distributions would shift with a higher percentage in the 60+ age group and less in the the 0 – 14 age group, but the overall percentage may remain of the same or similar magnitude.

We have to do something. Yes, that may mean adjusting beliefs and values that were formed over two thousand years ago when the population was considerably less than a billion and we hadn’t ravished our environment.

How we solve these problems facing humanity, I don’t know. I do know we need to start putting pressure on our leaders to find solutions. Leaders that believe Noah is going to save us are not going to be much help.

← 3D Printed Mud Housing
Unless you are a white male, chances are sexism and/or racism will get you →

13 comments on “We have a people problem”