Posted by Robyn Dunphy on February 4, 2015 in General, Politics 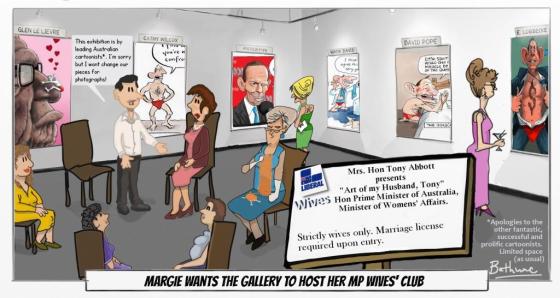 First let me say I personally have no problem with the words “husband” or “wife”. *Ducks missiles flying in from some of the feminist fraternity* In my view these words are merely relationship descriptors, no different than son, daughter, mother, father, sister or brother. Compared to some languages, English has very few relationship descriptors: some cultures have words to describe the specific blood relationship, such as mother’s brother’s daughter, father’s brother’s son and so on.

I recognise that the history of patriarchal societies has meant the word “wife” still, for some, carries a connotation of ownership. In my view language changes as society changes and to me the connotation is no longer there – depending on USAGE and CONTEXT.

Had this sub-title read “Margie Abbott calls on wives, husbands and partners” I would have been perfectly happy.

Had this sub-title read “Margie Abbott calls on parliamentary partners” I would have been perfectly happy.

I am not at all happy with “wives and partners”. It smacks of treating women as less equal – again! Used in this way, “wives” does carry a connotation of ownership.

The word partners, alone, would have been the best choice as it covers husbands, wives and same-sex partners in a way that indicates equal standing.

I am not quite sure what this invitation is supposed to achieve. We already know there are not that many women on the Liberal side of the House of Representatives, so one can therefore extrapolate that most of the invitees are women. Are they supposed to go home, in such sympathy with poor Margie’s predicament, that they withhold sex from their husbands until such time as all the backbenchers fall in line and swear allegiance to Tony? Sex strikes have been used in the past, for instance in Togo to bring down a dictator. I can’t locate an example of a sex strike used to keep a captain at the helm, but I guess anything is possible.

Or are they supposed to go home and say something along the lines of, “But darling, Margie assures us Tony is such a great leader and he is promising to listen to you all. Please don’t challenge him or call a spill, if you make an appointment with Peta, she will pass on your concerns!” They clearly can’t actually talk directly to their leader: he changed his phone number.

The purpose of the event aside, I’m bothered by that damn headline. Tony is not responsible for the headline, but some sub-editor at the Herald Sun needs to be dragged into this century.

I was thrilled to have Julian Cribb comment on another of my articles. Julian pointed me in the direction of an article of his published in June last year. The Age of Women: why the world needs one – a great article I hope readers will visit if they missed it when originally published.

Closer to home, is the apparent willingness of the Abbott government to trade off a threat to future generations from climate change, which it acknowledges for the sake of near-term fiscal gain, purely a reflection of its ideology or economic philosophy – or also the result of a preponderance of bloke-think?

Bloke-think rings loud and true in the “Margie Abbott calls on wives and partners” headline. News.com.au dropped the partners totally, the headline read “Tony Abbott’s wife Margie reaches out to MP’s wives to get support for her husband, the Prime Minister“. Not sure how to read that one at all.

I’m liking the concept of an Age of Women more and more! How about you?

Many thanks to Jen Bethune for her wonderful cartoon!

← 5 little-known reasons why pharmacists should not be playing doctor
Why Dysfunction? →

8 comments on “Wives and partners? WTF?”