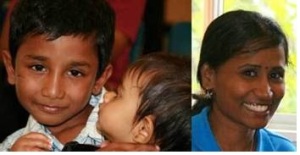 Ranjini and her boys

In May last year I wrote about Ranjini.  Ranjini is still being held in detention and is about to give birth to her third child. Ranjini may already be in labour as I write this. Edit – Ranjini gave birth to a lovely baby boy January 15th!

I want to stress, this is NOT about the whole “detain without right of appeal” issue – this is JUST about Ranjini’s case. In THIS case, ASIO can take action.

Damian Spruce, refugee researcher, adviser and lawyer who teaches Law and Social Theory at the University of Sydney, says:

It sounds like a positive step to ask ASIO to review it voluntarily & could be quicker than waiting for the independent review.

For those wanting a detailed legal perspective of this case, I refer you to Julian Burnside’s excellent article “Jailed for life but not told why”, where he said:

They may remain in detention for years, perhaps forever. How can that be, in a free democratic country like Australia? It is the result of two court decisions which most Australians have never heard of.

First, if a person is adversely assessed by ASIO, they are not told what facts ASIO took into account in forming its views, so it is virtually impossible to show that ASIO was wrong.

David Manne launched a High Court challenge and it seems to have been a partial win which is absolutely terrific, because change will come. It doesn’t immediately assist Ranjini or her children.  The Government is also challenging the ruling of the court in relation to those who arrive by boat.

I like to keep things simple. It seems to me, a mere simple citizen, the simplest way to resolve the Ranjini situation is for ASIO to review the findings of the security assessment. We know Ranjini has no right of appeal; surely ASIO have the right to review their own findings. Sometimes we can’t see the forest for the trees: we overcomplicate everything. Let’s take the simplest approach.

Advocacy organisations can only do so much – people power can achieve a lot if we act in concert.

I understand ASIO have a very important job in a world where there seems to be ever increasing instability. I also know that no-one on this planet is perfect and some decisions should be reviewed. On of the reasons I don’t support a death penalty is because mistakes can be made. Ranjini’s adverse security assessment is one decision many Australian’s feel very strongly about. Many people have written to various politicians and other organisations. Why not simply write to the organisation that undertook the assessment in the first place?

I urge all Australians to write to ASIO to express you concerns about the case. If I can, so can you.  Show ASIO it is not just the advocacy organisations that care, it is also the people of Australia. ASIO made the assessment, ASIO can review it. Copy in the Attorney-General’s department and the Department of Immigration and Citizenship.  Links to contact details are given at the end of this article.

I write to request you reconsider the security assessment of Ranjini.

Ranjini was granted refugee status pending the finalisation of the security checks. Those checks were undertaken by ASIO.

While the reasons for ASIO’s adverse findings have not been published, reliable sources have stated it is believed the reason for the adverse findings relate to Ranjini’s deceased husband being suspected of activity not considered appropriate.

I find this unconscionable for the following reasons.

Furthermore, I question whether a husband, in similar circumstances, would be found to be a security risk by ASIO on the basis of the actions of a deceased wife.

Given information relating to the assessment is not available to the public, on the basis of what little information is circulating, the adverse findings appear to lack cultural mindfulness and seem, on the face of it, possibly sexist.

Ranjini is a woman in desperate circumstances, with the opportunity of a new life. A loving new husband who accepted her children as his own. Ranjini is about to give birth to an Australian citizen as a result of the marriage Australia gave her permission to enter into.  The child will, I believe, qualify for citizenship on the basis of the status of the father.

Sadly, when I speak out like this it still worries my husband. He worries about retaliation. He comes from a regime where speaking out such as I do is not always safe. I have faith in Australia and am very glad we live in a nation where we have the freedom to fight for what we believe is right. Let us ensure we use our freedom wisely. Let’s ensure we protect our freedom and our humanity.

21 comments on “Open Letter to ASIO”