Medicare is not the problem

Posted by Robyn Dunphy on February 21, 2015 in Politics

This article continues from Sussan Ley updates the nation on Medicare.

I spent several hours last night looking at the Medicare statistics. I came to a conclusion which may send a few readers reaching for their smelling salts. I ask that after you’ve taken a whiff, you stick with me. My conclusion may seem radical a first, but I believe there is method in my madness. 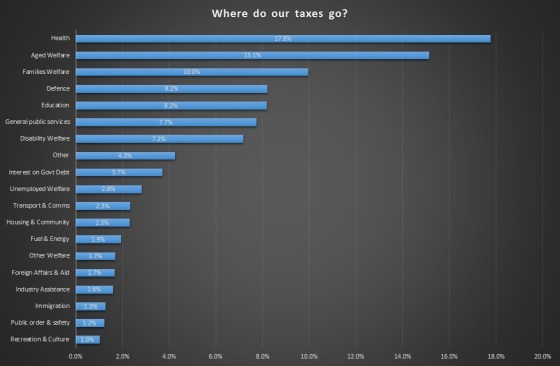 Australia has to make a decision on a very simple question. Do the majority of Australians want universal health care? I believe the answer is yes, on the basis over 80% of Australians support Medicare. As we can see above, this country’s largest single expense line is Health. 17.8% of the taxes you and I pay is spent on Health. If we group all the Welfare lines together, Welfare accounts for 36.8%, more than  double Health.

The Medicare ruckus has focussed on general practitioner services. Although broken into several sub-categories in the Medicare report, I have grouped them into Primary Care below. That category accounts for 33% of Medicare expenditure. This sounds like a lot – until we factor in total Health expenditure of $62 billion. Medicare is only 30.8% of total Health costs. Put another way, the government is making a massive fuss over 10.2% of our Health expenditure. The most concerning aspect is that front line primary care is vital. Ample evidence has been provided by the experts showing that early detection of health concerns allows for early intervention resulting in lower health costs overall. Yet this is the very area of medicine the government want to make less accessible for sections of the community.

Yes, I agree, if we look at Medicare alone primary care is the largest category. Even of I grouped the specialists, obstetrics and anaesthetics categories together, primary care would still be the area of highest financial outlay. It is understandable that the government look at the information and leap to the conclusion the area that has to be tackled is primary care. Pathology, while a high number of services, is financially efficient per service: the bean counters would be happy to leave it alone.

The trigger for the government’s focus is possibly the Medicare Levy itself. In round numbers, the Medicare Levy contributed $10 billion against a services outlay of $19 billion – just over half. We all know that if we earn $1,000 a week we can’t continually spend $1,900 a week or we will be in major financial strife. But we can’t peg back $62 billion by focussing on only 10.2% of the costs.

I suggest we scrap the Medicare Levy as a separate revenue stream altogether. It is misleading and encourages policy makers to focus in the wrong area. Medicare has been around for forty years, let’s just accept we have a universal health system and be done with it. I am not suggesting we forego the income stream from the Medicare Levy, simply absorb it into the income tax system. Alternatively, absorb it into an increase in the GST rate. There are options here and our policy makers should be considering a range of ideas. The GST increase option may be a better alternative as the Federal Government makes grants of GST proceeds to the states and makes health grants to the states. Those who have more disposable income would contribute equitably to our health system costs. An increase to the marginal tax rates may be harder to sell.

While such a strategy will remove the focus from that $9 billion “shortfall”, it won’t reduce the proportion of our taxes that go towards providing a universal health system. Several commentators and experts focus on health expenditure as a percentage of GDP. One such expert is Professor Jeff Richardson, Foundation Director, Centre for Health Economics at Monash University. Here is an extract of a recent article on The Conversation:

As a percentage of GDP, Australian government spending on health is the tenth lowest of the 33 countries in the OECD database and the lowest among wealthy countries.

Nor is it true that total health expenditure – government plus private spending – are unsustainable. Australia spends about 9.5% of GDP on health services; the United States spends 17.7%. And while US spending may or may not be good value for money, it hasn’t undermined its economy or sapped the vitality of the country.

It is interesting that Professor Richardson uses the term “value for money” given Sussan Ley has taken to using the term “value signals” rather than price signals. Value must be considered an easier word to sell to the electorate than price.

I spent considerable time massaging numbers to see if I could find a way to have bulk-billing of children and the retired continue, require a reasonable co-payment from those of us earning an income (we already do pay, as discussed in my previous article) and have Medicare break even without sending doctors to the poor house. I ignored the NDIS in that exercise. I looked at such options as increasing the rebate to 100% of the scheduled fee for concessional patients, and a $20 co-payment for the rest of us with our rebate remaining at 85%. With a workforce of 11,666,000 (as at January 2015) this just wasn’t going to work. There are other more sophisticated approaches that could be considered but all would make Medicare more complex to administer (and were too complex for me to model at the dining room table on a Friday night). Such options could be to have a scale of rebates and co-payments linked to annual income or to have marginal levy rates. These options all make the system more complex to administer and where is the value-add in that? I don’t see it. Complexity for no real health benefit would surely lead to a situation of diminishing returns.

Without boring everyone to tears with spreadsheets, it is suffice to say the easiest solution would be to increase the Medicare levy to 3%. Based on our work force and the average weekly wage, the revenue from the Medicare Levy should be closer to $13 million than $10 billion, but I’ll leave it to the ATO to work out where the other $3 billion is – the health insurance rebate, perhaps? Setting the levy to 3% means many of us would be paying a considerable amount per year. Check your ATO assessment notice and double the amount.

It has been suggested that the burden of our ageing population’s health costs, especially once we start living to 150 years old, will be one of the factors that will lead to Medicare becoming unsustainable. I compared the services age brackets with our population.

Blue for the males, pink for the females. Don’t go getting all feminist on me for that, it was convenient and I like pink. Sue me. As we can see, it really isn’t the aged members of our community that are highest users of services. Remember, we are looking at only 30.8% of our total Health expenditure here, not the $62 billion. Women between the ages of twenty-five and seventy-four are the highest users of Medicare services. I don’t believe we are all hypochondriacs. When I was researching my own medical conditions I discovered many medical conditions occur more frequently in women that men. Hyperthyroidism is one such condition and many of the eighty plus auto-immune conditions affect women more than men. Auto-immune conditions are also worryingly on the rise.

If we want to reduce our Medicare costs and I suggest our Welfare costs, we need to be looking at why adult women are needing more health care and finding solutions. We also have to accept there may be no solutions. I cite auto-immune conditions because I’m personally impacted and therefore have done more research on the topic, but there may well be other drivers to women needing more medical care. Obviously having children is one driver, but we see in the second graph above obstetrics is not a major category of Medicare services. I am currently under the care of three specialists and my general practitioner. During 2014 I had a high number of Medicare services so I certainly fit the statistical profile. I had umpteen blood tests and the gambit of imaging (MRI, CTs, ultrasounds, nuclear scans). The comments on my previous article indicate I am not the only one under the care of more than one specialist.

The rate of bulk-billing still stuns me and comments from readers on both The Australian Independent Media Network publication and on this site produced very little evidence of patients being consistently bulk-billed. I thought perhaps pathology and imaging services were distorting the overall average, but close examination of the statistics revealed this was not the case. It remains an aspect to this whole debate that I have trouble accepting. I’ve even considered there is a flag in the computer systems not getting checked, but then our Medicare statements wouldn’t be accurate and my recollection is mine generally has been. So I have to accept the 77.2% bulk-billing rate on face value.

this will only take a minute… pic.twitter.com/CFSvPoFZQ0

Population statistics sourced from the ABS.

Medicare statistics sourced from The Department of Health.

Allocation of government expenditure from my personal Tax Assessment Notice.

All graphs developed by the author.

5 comments on “Medicare is not the problem”