Posted by Robyn Dunphy on February 2, 2015 in General, Politics

Today has been interesting to say the least. The tabloid Herald Sun, usually considered more right wing, is using the harshest words. The used-to-be-a-broadsheet-but-isn’t-any-more The Age is taking a much softer approach to reporting the Abbott leadership “genie out of the bottle”. I think the genie has done a bunk, to be honest, but that is yet to play out.

Above is the headline I received in my morning notification email. Below is the headline actually displayed on the Herald Sun website for the article (I clicked directly through). We’ve gone from “knives” to “slipping”. A much gentler approach, don’t you think? 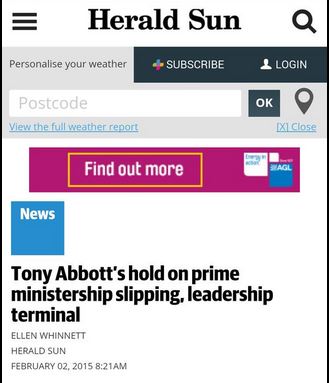 I’ll admit I’ve been gloating the last few days. I had suggested for quite a while that Labor could win the Queensland election. I should have had a punt, I’d have collected, I believe, as even the bookmakers got the odds wrong.

Not only were Queensland voters very disgruntled at a state level, the antics in the weeks/days leading up to the election didn’t win the Liberal camp any friends or influence people. Actually, yes, there was influence – just not of the positive, in favour, type. Swings of 22% and more in some seats in Queensland, but this was, according to the federal Liberal camp, all about state issues. I suppose I am pink with green dots too.

And that’s just the high profile stumbles and bumbles in the space of a few days.

Compare the headlines from the alleged other side of the media fence with the “knife” above. Much “softer” but still indicating unprecedented unpopularity – and not just with the voters. 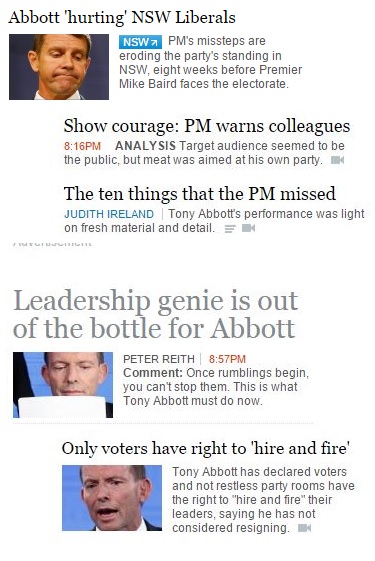 I like the Leadership genie article. We went through all this leadership debate with the Rudd/Gillard/Rudd merry-go-round. Now we have the Abbott leadership conundrum, which will further detract from any real discussion of actual policies. Now the Liberals have a problem – and I’m not the only one who expressed the thought below.

Libs in bind here. Refuse to change leader so they don't look like Labor, but can't win 2016 with Abbott as leader. Dichotomy, much? #auspol

This picture flew past in my Twitter feed – you have to admit not only is it funny, it may prove rather prophetic.

Whatever your politics, this is pretty funny. Pic taken by @TheAmandaWoods in northern NSW. #auspol #abbott pic.twitter.com/iQ7vlmGpt2

I stumbled across this headline from January 2014: Abbott: ” Jury Not In On Me Yet” – Australia: ” Jury Is In On Abbott, Abbott Found To Be Failure”. Will he survive now, twelve months on?

Today Abbott gave a key note address the National Press Club. For some strange reason he seems to be under the impression only an election can “hire and fire” him. Perhaps he needs to read up a little, as the only people who voted for Abbott are the constituents in his own electorate. His parliamentary TEAM, of which he would do well to remember he is a member, voted him leader and that makes him Prime Minister. That team, the elected representatives of Team Australia, have a responsibility to replace him if he fails to perform in his role. The prevailing feeling seems to be the team needs a new captain.

A poll comparing the approval ratings of Mr Abbott, Julia Gillard, Kevin Rudd and John Howard at the same point of their first terms in office shows Mr Abbott lagging well behind.

Julia Gillard had an approval rating of 33 per cent at the 16-month mark of her first term in October 2011, while Kevin Rudd’s enormous public popularity was sitting at 74 per cent in October 2009.

There is the little matter of who cried for an election when in opposition versus who doesn’t want one when he is the deer in the headlights. Over on The AIM, Michael Taylor sums it up beautifully.