I often joke I went all the way to West Africa to get married and never saw a lion. I have loved lions since I was about three years old. I dreamed of having a pet lion for years: highly impractical on a sheep and cattle farm, probably, but I dreamed nonetheless.

Today I read a small article in the Herald Sun. The story is not beautiful at all. 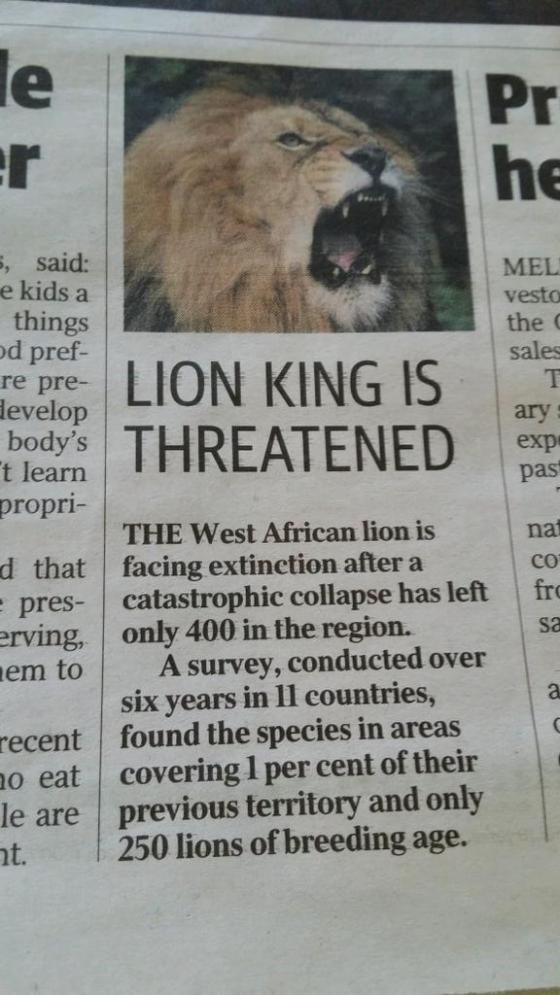 This is so very sad. While lions are not the only endangered species (check the World Wildlife Fund list) it is rather symbolic when the king of the jungle faces extinction.

Why is it humans are so destructive? A sad case of “We’re all right, f*** everyone/everything else”?

I am reminded of the terrible shots before Christmas of big game hunters with their kills. The elephant one came from this gallery on a hunting safari web site. Don’t click that link unless you have some tissues handy. The Hoax Slayer led me to the source. Also has some interesting comments about the social media horror and how fleeting it really is.

Much of the time, people get momentarily angry when confronted with such a picture, hit the share button, and then promptly forget all about it. Some claim – rather vaguely – that circulating such pictures “raises awareness”. But, the messages give no details about how people might actually fight against such activities and offer no links to further information. Thus, any “awareness” raised is likely to be fleeting at best.

There are several places you can go to support endangered species, the World Wildlife Fund being one, the World Conservation Society is another. Don’t be momentarily angry.  Act. Today.

← What if your job is a major health risk?
Captain, Captain, I don’t know where we are →